Well if you are 90's kids and cunning enough, you can guess what "Chapter 9" means. Both the government and private schools have a compulsory subject "Health, Population and Environmental Education" which we used to say "EPH" subject. The rest of the topics used to be boring but as the mid term approached, students would be excited, some embarrassed and teachers were hesitant even to start the chapter. So the topic was "Adolescents and Reproductive Health". Back then even some teacher would skip it and ask for self study (Ours were nice though). No doubt the students would have already sneaked in the pages and diagrams at home. Even if taught how the teacher would be just facing the board making diagrams and boys in the back kept giggling and girls embarrassed and shy. No matter how the sitting arrangements were in other days but that day you could see proper demarcation between boys and girls in the hall. Most of them were already confused with the changes they were having and most of them already so high on their hormones, they were on the top of the world. Some guys mostly already had access to the porn and some still confused with their wet-dreams.
It feels nostalgic now. I feel quite proud how people are realizing the importance of sex education and how the taboo is casually disappearing. Nowadays girls don't panic if they are dying when they bleed and how boys are slowly are getting comfortable to buy sanitary pads for their sisters, mother, wife or daughters.
How a secondary changes for an early adolescent is not a disaster and how little humans are getting comfortable to discuss things bluntly. How smartly kids are getting to know about the "good-touch and bad touch". Back then, the actual process of conceiving was same stork-baby stories even for a teenager.
How a girl would cry that she would get pregnant when she got kissed. And a boy would struggle so hard to look like his friend who already grew some beard.How a word masturbation was as uglier as pornography and how hard it was to know about safe sexual practice. Its was merely influenced by the concept that discussing about it, is like committing a sin or getting westernized .
The rate of child abuse is no doubt alarmingly increased but see it on the other perspective it is increased because it's now on record. Children are learning that it's wrong and they can speak it up unapologetically. You may not control sick minded pedophile but the least you can do to your child is make an environment where they feel comfortable to speak up. Though the society is getting liberal, the rate of teenage pregnancy is certainly decreasing. May be young boys and girls don't hesitate to slip a condom in their purse instead of having nightmares after unsafe sex.
I can bet some of us are still living in above mentioned 90's version.Well being cynical, if teaching your daughter about genital health and safe sex will turn her more vulnerable or teaching same to boys will promote him to do more uncivilized act, be doubtless the benefit always outweighs the unfortunate circumstances. If you are bold enough to take a action for your child, students or any younger ones, I trust you you have power enough to drive them in a disciplined way. It's up to you what you prefer being conservative and feeding the taboos or contributing to human civilization and helping those confused mind a better comfortable abode. 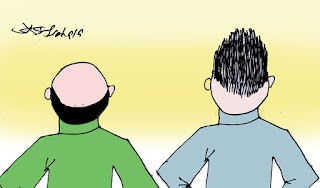